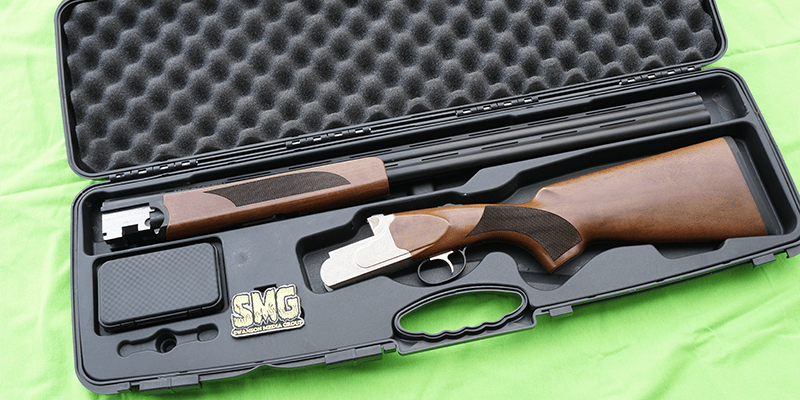 Mossberg Silver Reserve II Shotgun Review In the world of shotgun shooting sports, the sky is virtually the limit in what you can pay for a good upland game, trap, or skeet gun, especially when considering the traditional over/under configuration. With names such as Krieghoff, Kolar, and Perazzi, one can purchase a fuel-efficient passenger car cheaper than what a lot of professional and Olympic shooters prefer. For the rest of us mere mortals who like to occasionally bust a clay pigeon or two with friends, there are much more affordable shotguns on the market. This week, we take a look at the Mossberg Silver Reserve II Shotgun, and we recap the results of putting it through the paces on the range over the past several months. The Silver Reserve II is a series of hinge or â€œbreak action shotguns offered by Mossberg's International division imported from Kahn in Istanbul, Turkey. This series of over / under configured shotguns uses a standard box-lock with double under lugs. The Silver Reserve II series comes in various models, chamberings, and barrel lengths such as Field, Field Combo, Sport, SuperSport, and the small, 20 gauge only Bantam model. Currently, most models are offered in 12, 20, and 28 gauge as well as .410. (Sorry, no 16 gauge in the entry-level Mossberg) Barrel lengths vary from 26 to 32 as well as varying barrel rib widths. All models come with hard-chrome plated chambers and bores which make for easy maintenance and cleaning. Except for the 28 gauge chambered for 2 3/4 shells, all other gauges are chambered in 3 .

For this review, Mossberg sent over the basic Mossberg Field Model #75412 12 gauge with extractors. (Ejectors are featured on the Sport and SuperSport models) The shotgun arrived in a compact hard plastic case broken down into two parts, the receiver, and the barrels. Accompanying the shotgun inside the box were the owner's manual and another small hard plastic case. This box contained 3 screws in the chokes to replace the two already installed in the barrel. With literally a flick of the wrist, I assembled the Silver Reserve II and began to inspect it. The bright polished silver finish and full covering scroll work matched up well with the good-looking Black Walnut stock set. Overall, the whole shotgun made a very impressive-looking setup, but I assure you, it would never be confused with a hand-built $40,000 Krieghoff, nor do I have a need for it to be. I dropped in a pair of 12 gauge Snap Caps and mounted the shotgun to my shoulder in a shooting stance. The 28 barrels gave the gun's relatively light, overall 7.5lb weight a good balance, and easy swing. My excitement was cut short however once I pulled the trigger. Despite virtually no overtravel, the trigger was rough and a bit heavy. This would be noted for revisit once the opportunity to range test the shotgun came about. In past experiences, all shotgun trigger seems heavy when focusing on it but in the field, with my mind on the target, the trigger becomes a relatively dead issue.

We take pride in the quality and originality of our products

Our products reach our clients in a timely and discreet manner

We provide support for all customers at all times

If there are any defects upon arrival, do return the weapon and be refunded in full.